‘Showrunners: The Art of Running a TV Show’ is the documentary film for which Emberlight produced the opening sequence and in-movie graphics.  Released in Oct 2014 the film, directed by Des Doyle, has received a phenomenal reaction worldwide. Upon it’s release, Showrunners quickly reached number 1 position in the ITunes documentary charts. Starring people like Joss Whedon, J.J. Abrams, Ronald D. Moore, Terence Winter, and Damon Lindelof, to name but a few, this film offers a rare glimpse at what goes into producing some of the biggest hit TV shows in America.

Director Des Doyle, envisioned that opening sequence would be set in a writer’s room. Much of the intriguing behind the scenes footage is shot in the various writers’ rooms across Hollywood and it becomes very clear to the viewer that it is the script that is at the heart of every TV show and every Showrunner. It was our job to storyboard and shoot the opening sequence in a way that would allow us to seamlessly integrate the name titles into each shot. We carefully composited the titles into each shot and paced and graded the sequence in the edit until we got it right. Music was composed externally specifically for the sequence.

Special thanks to our DOP on the main titles; Mick Brennan. 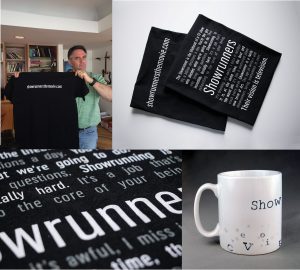